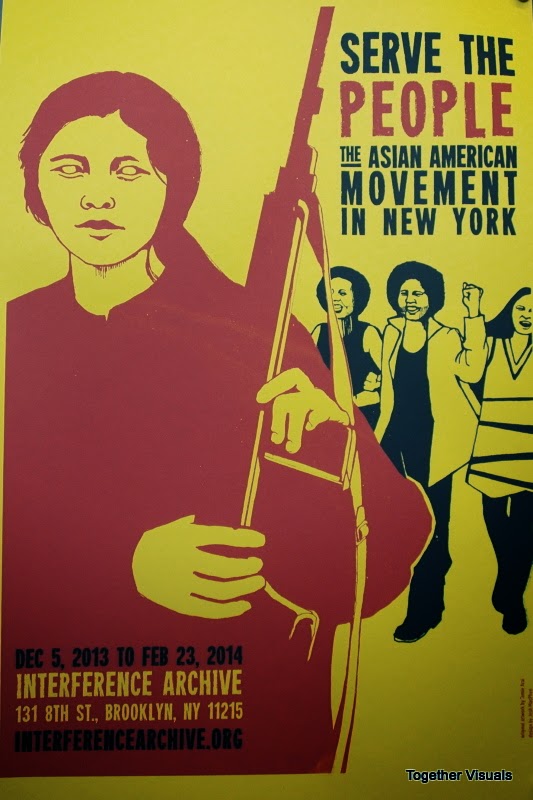 Serve the People: The Asian American Movement in New York charts a history of Asian American activism, organizing, and cultural production in the 1970s, the first exhibition to focus on New York as a center of this national phenomenon. Through posters, leaflets, newspapers, film, and music, Serve the People shows how Asian American identity was shaped by reclaimed histories, revolutionary politics, feminist awareness, third worldism, and community organizing. The culture created by young activists and artists in the movement embodied their ideals, speaking to the excitement and urgency of the time.

Curated by Ryan Wong at Interference Archive
The show is still going on until March 23, 2014.


In 1970s New York, one might have heard the folk group A Grain of Sand sing about “the struggle,” walked by a mural celebrating Asian American histories, or attended a screening of a documentary on garment workers in Chinatown. I Wor Kuen and Worker’s Viewpoint Organization distributed their revolutionary messages through newspapers and study groups, while community organizations like Asian Americans for Equal Employment galvanized Chinatown into mass protests. Basement Workshop served as an umbrella for artists’ projects as well as groups like Chinatown Health Fair, Asian American Resource Center, and the Amerasia Creative Arts Program.

In recovering and presenting this past, Serve the People cuts against the stereotype of political apathy among Asian Americans, and offers a radical history for today’s activists to build upon. The political horizon for Movement activists was limitless, whether they worked towards community control, artistic self-expression, or political overthrow. This energy is palpable in the culture they produced. In light of the great immigration of Asians to America since the 1960s and the looming questions of America’s economic and political relation to Asia, these works remind us of a moment of pride and revolution for a newly-formed identity.

Visitors are invited to handle and read through two of Interference Archive’s newest acquisitions: the seminal collection of art and poetry Yellow Pearl, and copies of the nationally-circulated Bridge Magazine. Other objects on display include the Asian Americans for Action Newsletter (published in by Yuri and Bill Kochiyama in their home), buttons and posters for the Chinatown Health Fair, iconic photographs of the Peter Yew police brutality protests by Corky Lee, and posters designed by artist Tomie Arai.

On February 21, 2014, Tomie Arai hosted an informal conversation about her rare images created over the past four decades. The event was held at Asian American / Asian Research Institute (AAARI) in midtown New York City.
Posted by Unknown at 8:29 PM